Mason Greenwood has hailed Wayne Rooney as his role model.

Rooney used to play for Manchester United ever since he was a teenager.

He is United’s record goal scorer. He played for Manchester United all his life after leaving Everton.

He went on to become United captain and England captain as well. He was one of the finest goal scorers in the game but could play in other positions as well.

Rooney has now retired from football. However, his legacy continues to thrive as youngsters coming through the ranks in the academy have made him their role model. The latest addition to the list is Mason Greenwood.

He said, “Wayne Rooney and the Brazilian Ronaldo have always stood out for me. I’ve always looked up to them.

“Rooney is such a great goalscorer, that is what I want to be.

“He’s done most things on a football pitch and you have to have a role model.

“I’ve never seen him! I’ve seen his games obviously and watched the highlights on YouTube. Hopefully I’ll get to meet him one day.

“Ronaldo was quite a while ago — but my dad used to show me clips of him. He used to play for all those great teams.” 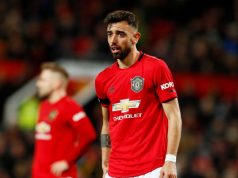