Manchester United signed on deadline day as a back up striker.

The injury to Marcus Raashford put United into work and after missing out on several striking options, the club settled on Odion Ighalo.

What was just a back up option for Ighalo, became a dream come true move for Ighalo.

The striker is a boyhood fan of the club and has now revealed how it felt to represent the Red Devils.

“When you say those kinds of things (about playing for United when he was a child), people say ‘are you crazy?’ because back then you don’t even know what the future holds,” Ighalo told beIN Sports.

“First you just want to go outside the country to start playing – even for a small team, not even to talk of going to United.

“But my support for the team was great. I tried to see every game of United every weekend if possible. I still remember those memories.

“I never imagined it was going to turn out this way. Even when I played in the Premier League for Watford, I never thought this was going to happen.”

Ighalo has made an instant impact at the club!

Manchester United In Talks With Dortmund Over Jadon Sancho, Will Have To Pay Over €110m 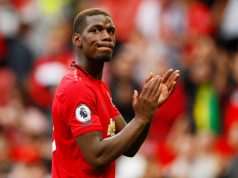 Bruno Fernandes Has Shown Out Paul Pogba At Manchester United