Manchester United legend Roy Keane is not one to mince his words.

He is one of the few critics who calls it like he sees it and does not try to win the favor of a particular club or get liked for TV ratings.

He has a stern take on the current crop of players at Manchester United. Although he believes Ole Gunnar Solskjaer is taking the club forward the right way, he has not minced the fact that this team is not enough to win titles.

While everyone around United believes they need to strengthen their forward line, Keane also believes that the current set of defenders are not good enough.

“I think there was certainly a feel-good factor back at United over the last number of games,” Keane told Sky Sports. “In the back of your mind, if [Paul] Pogba can get back, if people like [Marcus] Rashford can get fit for the end of the season it will be a big, big boost for them. There’s definitely a feel-good factor.

“But it’s still a long way back for United. They’re a long way behind City and, obviously Liverpool. The signs are a lot better than they were six or 12 months ago; the signings have settled in very, very well, and will get better with time.

“If they can have a good finish to the season – if we get round to playing games – and if they can get one or two very good players again in the summer, then it’s another big step. I think in terms of recovery there’s still a bit to go yet.”

“Every time you’re talking about the big clubs, you talk about attacking players. I still think they need one or two defenders.

“I’m still not convinced by the center-halves, I’m certainly not convinced with Shaw. [Brandon] Williams has done well as a young kid in that side.

“I know they’ve been linked with a number of players – [Jack] Grealish, [James] Maddison – nobody springs to mind. 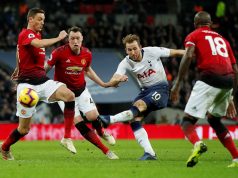