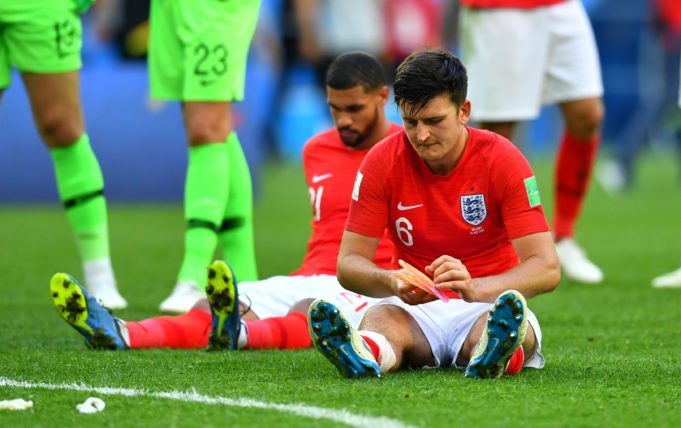 The English defender has been linked for a long time for a move to Old Trafford.

He is keen to “play at the highest level” and for that ne need to make a move to big clubs.

The player was a part of Sheffield United in his initial days where he spend 4 long years playing over 150 games for the side and was 12 times on the scoring sheet.

He then moved to Hull city where the defender played 75 games over a span of 3 years and scored 3 times.

The player was then signed to Leicester City on a five-year contract for an initial £12 million fee, potentially rising to £17 million with add-ons. He represented the side for 44 games and scored 2 times.

Maguire is aware of the speculation of him with a possible move to Old Trafford.

In talks with the The Sun, the player admitted that he wants to play for big clubs.

He said, “Every player wants to play at the highest level”

“I’ve just come back from playing at a World Cup, where I really enjoyed the high pressure of the games. It was something that I really thrived off”

“Leicester have been unbelievable to me and I’m really happy there but I’m also an ambitious player and everyone wants to play at the top.”

However the club manager Claude Puel wants the defender to stay at the club.

The manager said, “It is important for Maguire to continue for Leicester. It is a good feeling. If our players are interesting a lot of clubs it is because we are recruiting well and doing good work. It is important we continue this”

“When we welcome players back from the World Cup, I hope we can give them the opportunity to continue advancing their ambitions and perform in the Premier League.”