United have received good news about a potential transfer for Jadon Sancho.

However, they are not the only Premier League club interested.

Jadon Sancho has become unsettled at Borussia Dortmund and wants to leave, as could be about to spark a bidding war.

Daily Mail claims that the England international is ready to leave Borussia Dortmund, a development that will have his numerous European suitors on red alert. The exciting teenage winger is said to have grown dissatisfied with life at Signal Iduna Park after being dropped for a Bundesliga fixture last month for disciplinary reasons.

Head coach Lucien Favre further tested their relationship when he withdrew the Manchester City product before half-time of the heavy Der Klassiker loss to Bayern Munich.

Manchester United have long been linked to Sancho, and the news of Sancho’s decision to depart will be noted at Old Trafford, but the report claims Manchester United‘s bitter Premier League rivals Liverpool are also showing strong interest. La Liga giants Real Madrid appear to be another potential destination for one of the continent’s most coveted young stars.

The Red Devils did attempt to get a jump on their rivals and enter negotiations early for their target. They were interested in beginning talks with both Dortmund and Sancho last season itself, as revealed by an Amazon documentary. However, the German side was unwilling to sell their player at that point and thus the deal did not move forward.

Nevertheless, with the Englishman now worth up to €100 million, Dortmund have reportedly decided that it is time to sell him. As such, they have also begun their search for a suitable replacement. 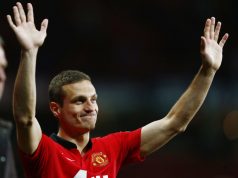