Both teams beat their opponents in the quarters.

Which means, we will get to see another city derby soon.

Manchester United will face holders Manchester City in the semi-finals of the League Cup after both sides saw off lower league opposition to make the last four on Wednesday. Raheem Sterling’s second half double ensured City warded off a shock to win 3-1 at League One Oxford, while United ended fourth-tier Colchester United‘s fairytale run with a 3-0 win at Old Trafford.

City have won the competition for the past two seasons with Pep Guardiola’s only defeat in the League Cup coming to United three years ago. Guardiola’s men will have a chance to avenge their 2-1 Premier League defeat to the Red Devils when the sides clash over two legs in January.

Manchester United had to be patient before seeing off Colchester, who had beaten Tottenham and Crystal Palace to make the last eight. Marcus Rashford was guilty of missing a host of chances in a goalless first half. However, the England forward made amends six minutes into the second period with a calm finish to register a career-best 14th goal of the season.

Rashford was also the creator of United’s other two goals as Ryan Jackson turned a cross into his own net before Anthony Martial stretched to convert at the back post.

Leicester set up a semi-final meeting with Aston Villa after the Foxes survived a second half fightback from Everton to secure their place in the last four 4-2 on penalties after a 2-2 draw at Goodison Park. 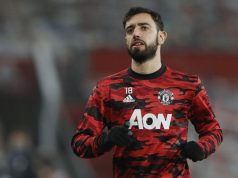