The big thing that has changed since the arrival of Ole Gunnar Solskjaer is not the results or the sudden reappearance of silverware.

It is the ability to find the right player for the club – not just on the field but also with the mentality.

The signing of Bruno Fernandes was an epitome of exactly what Ole desires at United – and he has a big wallet to back him up of course.

So what does Ole take into account while signing players and how did he sign Bruno? Here it from the manager himself.

“I believe that, of course, I need to go and watch him myself,” Solskjaer said when recalling the signing of the Portuguese star.

“I’ve always known [his ability], as I’ve seen him on telly and that stuff.

“When I went to see him live he was exceptional in his enthusiasm; the way he wanted to win, that winning mentality. That was fantastic when I saw him, but I have to go back to all the chief scouts.

“The scouting network has been really good, so it’s not like I can just pick someone and, if five of them say no, then I’ll force things through.

“It’s a team effort there as well. Of course, Bruno has come in and been fantastic for us.” 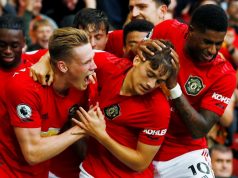