Romelu Lukaku’s exit is looming large and the Belgian striker is expected to dawn new colours before the transfer window shuts. He is being courted aggressively by Inter Milan, while Juventus also remain interested in his signature.

Lukaku’s departure would mean Solskjaer will need to add firepower upfront. He will need to buy a striker who can fire goals on a daily basis and be an improvement on Lukaku.

On that note, let’s have a look at five options the United boss can consider to replace the towering Belgian. 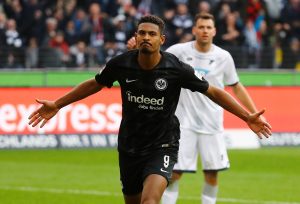 Eintracht Frankfurt had both Luka Jovic and Sebastian Haller in top form last season. While the former has made a move to Real Madrid, the future also seems to be bright for his strike partner who has attracted interest from Manchester United.

Haller scored 15 goals in 31 appearances in all competitions for Frankfurt last season. Apart from his sharp-shooting skills, he has built a reputation as a real frightening presence in the air, winning a whopping 6.3 aerial duels on average. Imagine how his aerial exploits would come handy when United try to bombard defences with long balls!

Haller is currently rated at €40m – a price tag United will have no trouble matching this summer.