While Sheffield showed faith in young Maguire, United were always classy with the lad.

Speaking to Inside United magazine, the centre-back explained (as quoted by Man Utd’s official website): “It was just after half-time when it happened. I had a clash of heads with Ravel [Morrison] and actually got knocked out.

“It was the only time I’ve been knocked out in my career, touch wood. It was a nasty blow and I was in hospital overnight. Obviously, it was disappointing to go off and not see the end of the game when the medals and trophy were presented.

“But, then someone [from ​United] got in touch and checked I was okay. They sent me a Man United shirt.

“They just said: ‘Good luck for the future, you’re a good, promising young player, keep your head down and so on.’ It was a nice touch from the club and just shows what a classy club United is.”

As for Sheffield, it is difficult for youngsters to be played regularly at the top level but that is what the club did despite Maguire making mistakes. 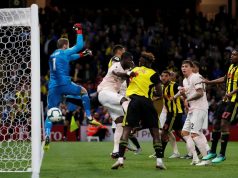