Another James screamer could not inspire United as they were held to a 1-1 draw by ten-man Southampton on Saturday.

Ole Gunnar Solskjaer’s side are now winless in their last three Premier league fixtures after their opening weekend victory over Chelsea.

Summer signing Daniel James got the visitors off to the perfect start with a sensational goal inside 10 minutes – his third of the season. But United were unable to build on their advantage and eventually conceded courtesy of Saints central defender Jannik Vestergaard.

The Dane out jumped Victor Lindelof in the box to seal a priceless point for Ralph Hassenhuttl’s men, who played the final 20 minutes with 10 men after Kevin Danso’s red card. Matters were made complicated when Danso, who provided a superb cross for the equalizer, was shown a second yellow card for a mindless challenge with 17 minutes remaining.

Manchester piled on the pressure, introducing Mason Greenwood and Jesse Lingard, but Southampton held firm despite the late onslaught. Sofiane Boufal went close as Saints hassled and harried from the outset, only to be undone as right-back Cedric Soares, making his first league start of the season, was dragged out of position by Juan Mata’s smart overlapping run.

That movement gave James time and space just inside the box to rifle a stunning effort past Angus Gunn into the top right-hand corner. The Welsh flyer’s next attempt was far tamer and easy to stop, while fellow new boy Aaron Wan-Bissaka poked over from a fine Scott McTominay cross.

Gunn produced an unorthodox punch when James next tried his luck and the offside flag saved Marcus Rashford’s blushes after he was found by the goalscorer’s cross in a good position but headed horribly wide.

Both sets of fans had something to cheer when a thumping Vestergaard clearance hit divisive referee Mike Dean – a moment that was followed by Saints belatedly jolting into life.

Danny Ings flashed wide and new boy Danso’s vast throw-ins were alarming the United backline. McTominay did well block a Boufal effort and Harry Maguire was booked for a lunge on Che Adams. Rashford fluffed his lines early in the second half after Vestergaard misread a ball over the top – a missed chance that the giant Danish defender would make United pay for.

Shortly after Adams lashed over from an acute angle, Ings met a smart Boufal corner with a flick that David De Gea did well to stop. But the ball fell to Danso and he turned to float over a superb cross that imposing Vestergaard headed home after beating Lindelof. 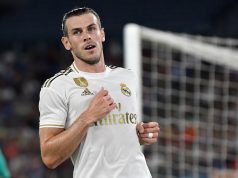 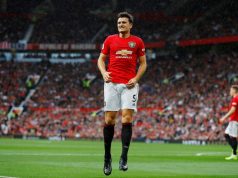